Hurricane Irma is about to hit Vertilux’s data center in Miami. Yet, with forward thinking and a CloudBasic fail-over setup on AWS, critical data from 45 regional SQL Server databases is safely mirrored in the cloud. Disruption avoided. 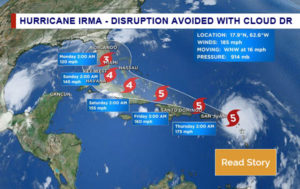 Hurricane Irma had a devastating effect on Florida. The super-storm caused state-wide damage, leaving millions without electricity. Winds of up to 130mph toppled cranes over high-rise construction sites in Miami, while ranging waters flooded many neighborhoods. More than a quarter of the state, virtually the entire South Florida, was ordered to evacuate. The massive population exodus caused gridlock and clogged the major freeways across the state.

Many utilities, while able to withstand the storm, were shut down protectively, causing further inconvenience to those who declined to flee from the towns located on the path of Irma. Strong gusts of wind carrying small pieces of debris and broken glass through the air, forcing everyone to seek immediate shelter. The business disruption is unprecedented, even for a territory like Florida, which has seen massive storms in its history.

The damages from hurricanes Harvey and Irma are estimated to be in the hundreds of billions, and even calculated in actual percentage points of the US GDP. While many think of these losses as mostly property damage, the modern enterprise depends on its uninterrupted data flows just as much as on its physical assets. In a data-driven world, insurance policies rarely can fully protect a business from disruptive events.

The unprecedented business disruption in Florida during the 2017 hurricane season did not catch global blinds manufacturer and distributor Vertilux by surprise. Thinking way ahead of time, the company baked in a solid Disaster Recovery solution in its cloud architecture, and was able to withstand the havoc.

CloudBasic, Inc., an Advanced Technology Partner of AWS, was instrumental in the development and deployment of a comprehensive disaster recovery solution, which not only ensured uninterrupted operations of the company, but also enabled Vertilux's Redshift based BI/DWH analytics.

When Vertilux deployed CloudBasic's BC/DR solution about 18 months prior to the devastating hurricane event, they also leveraged CloudBasic's capabilities to stream RDS SQL Server data to Redshift BI/DWH. They did not just buy a Business Continuity insurance policy, which may or may not be used in the future. They leveraged CloudBasic as an All-In-One RDS SQL Server DR/Redshift BI/DWH solution. CloudBasic for RDS SQL Server HA/DR and Redshift/S3 enabled the Vertilux management team to extract valuable business insights from its data by streaming it from the aggregated RDS staging/DR storage to Amazon Redshift for analytics and reporting with Tibco Spotfire launched from Amazon AWS Marketplace.

Creating a solid Business Continuity and Disaster Recover (BCDR) plan is not a trivial task. However, the importance of such preparedness cannot be overstated. The modern business organization has an ever shrinking tolerance for downtime. Whether it’s about cyberattacks, ransomware, DevOps errors, or unprecedented natural disasters, executives need to think ahead and make sure the enterprise they run can quickly get back on its feet, or avoid disruption altogether.

Vertilux, a global manufacturer and distributor of window blinds, aggregates ERP data from multiple on-premise locations into AWS RDS with mirroring to RedShift, for reporting and Disaster Recovery with CloudBasic.